Shatner Nicks
60 kilometers from the North sea mouth of the Weser river lies the Northern German town of Bremen, our destination for today’s ‘play and stay’. This morning’s checkout of the Berlin Hotel de Rome was smooth and we assembled in the lobby at 1:30 for departure. Not before I had my final visit to the pool of course. There was the usual legion of ‘undead’ (cruel but fair) outside intense and anxiously awaiting Mark to get an autograph or two, or three. Now don’t get me wrong, we all appreciate the fans and an autograph is all very well and a fine memento of a hotel forecourt encounter, Mark (and the band) are very willing to stop and sign but the faces are always the same and each time they appear, they have another photo, scratch plate (we don’t do those btw) or another magazine picture ready to sign. One is never enough it seems. Rudiger lives on.
Safely aboard the fleet of black beauties, Bernie leads the way out to an airfield with an incredible story. Since German reunification in 1990 it has become clear that Berlin needed to re-evaluate its airport structure with the construction of a large commercial airport, as Tegel Airport, Schönefeld Airport and Tempelhof Airport were aging and becoming increasingly congested. In order to ensure the economical viability of the project, a single airport concept was pursued, which meant that the new airport (BER) would become the sole commercial airport for Berlin and Brandenburg. As a consequence, it was decided to have Tegel, Schönefeld and Tempelhof (now a wonderful public park) closed upon opening of the new airport, and to ban commercial aviation from any other airport in Brandenburg. That was the plan anyway. After 15 years in planning and construction, two major highways being built and the removal of two villages, the new airport was scheduled for activation almost overnight on a weekend in June 2012. Due to massive construction and design problems with the fire protection system, this was delayed. There are flaws concerning the wiring, programming and implementing of the highly complex system designed by Siemens and Bosch, by which sprinklers, smoke extractors and fire doors will be controlled fully automatically. For aesthetic reasons, it was decided that the BER terminal building would not have any smoke extraction pipes on its rooftop. Therefore, in case of fire, smoke would be pumped into exhaust pipes that run below the building (thus, the natural behavior of hot air to rise up needs to be reversed), a set-up that at this scale is considered to be unique. There is still no firm date for the switchover and our arrival into and departure from Berlin were eerily quiet as the brand new roads and airport spaces were deserted. A real bona-fide ghost airport.
We were soon aboard our beloved jet which was ironically parked up next to the very same Embraer we used on our last European tour that is currently being used by X-Factor finalists and Cow-hole-creation ‘One Direction’. “Don’t let it go to your heads boys”. As we lifted off and climbed serenely through a moderate blanket of German cloud, we donned our shades as the sun burst into the cabin as Liz carried forth plates of sushi from the galley.
Sushi on the jet. Where did it all go right? It wasn’t long before I reached my sushi limit and this heralded our descent into Bremen. With Liz clearing up our tables at lightening speed, the ground came into view and our pilots touched down delicately in a mild 15 knot crosswind. A short taxi and Mannfred and the B team were airside to take us in the RR’s to the venue. Range Rovers to the plane. Where did it all go right?
20 minutes. It’s always 20 minutes. 20 minutes from the hotel to the plane, 20 minutes from the plane to the gig, 20 minutes from the gig to the hotel (We have actually stopped asking our drivers how long to so and so as we always know the answer)…Ahah! Not this time. The venue is located within 300 yards of the Bremen Park Hotel so unless you’re crawling, or you’re a snail, it’s not 20 minutes. Bang goes another theory.
Double D at the FOH sound desk… Howard and Glenn take a moment to ponder….things and Ianto tells his William Shatner joke to John, Kevin and Jim… Inside the aging arena, we locate to our dressing rooms and in a flurry of activity we go about our business. I pop in to the production office, hand Kevin (prod. manager) this evening’s set and soundcheck requirements, the band drop off laundry, some of us get waylaid by today’s soup (tomato), we drop in to see Ulf who has been mixing the shows for the USB sticks, locate the wardrobe lady who expertly irons our stage shirts..etc. etc. You get the picture. When the crew are ready for us on stage, Kevin comes to the dressing rooms to find us. Soundcheck and then dinner except that for me, due to my uncurbed indulgence on the plane, I decide to forgo tonight’s sumptuous repast. I turn away from Veal escalopes with baby potatoes, three other dishes on a menu I didn’t even read for fear of being overwhelmed and an Eton mess that was the embodiment of temptation. I walked at pace back to the dressing room to find Richard Bennett in a similar mind-frame. The pre-show routine was upon us once more and the vocal warm-ups were as loud and fun as ever, John made the honey, lemon and Ginger tea for those of us who require and at 8pm, we inserted our ear-buds, plugged into the radio packs and walked to the rear of the stage.
Our packs… The Union-Jack-besuited Crocks made his semi-German announcement and we were off again for another two hours of musical relish.
Pete Mackay, our asst. tour manager was out and about with his camera this evening and shot some great images.. 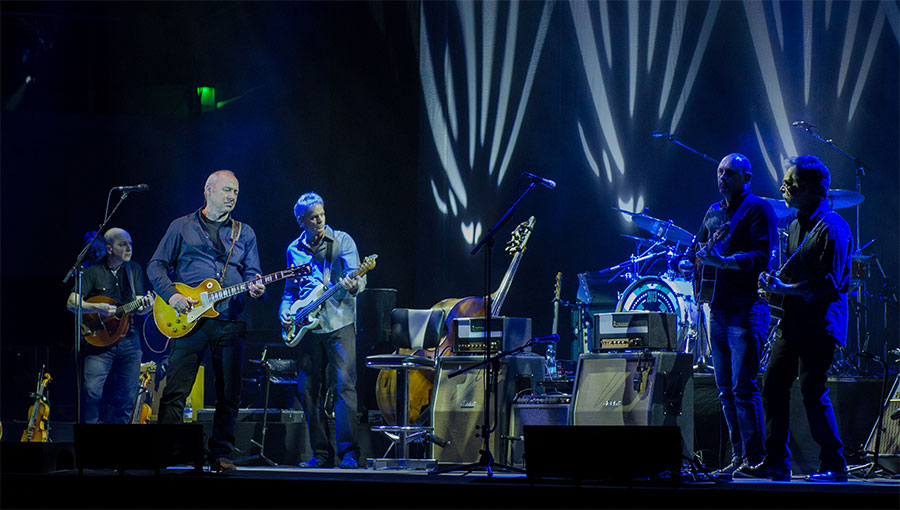 The after-show runner was swift and efficient as usual and less than two minutes later we were at the steps of the Park hotel being handed our room key packages. Once we found our rooms there was the challenge of figuring out how to get in. The key system here is notorious and few of us figured it out too quickly. I recalled it being an issue the last time we stayed here, on a promo I think, but I still had to engage full brain activity to accomplish the task. The trick is to hold the key card up to a strange, small knob below the handle and as soon as the light goes green, you have to TURN THE KNOB and push the door. Sounds easy? The hotel conceded that next year they are planning on changing the system. It’s a very strange, slightly weird place but we like it. A 19th century landscape garden hotel that once burned to the ground due to an over-enthusiastic firework display.
The Mercedes Benz 300SL Club were holding an annual event and the place was crawling with black-ties and delicious machinery. We had an after-show Becks bier on draught in the bar where we were entertained by a pianist who explored the limits, pushing the boundaries of chordal melodiousness. Imagine ‘Strangers in the Night’ played over a single, repeating bass note.
Amused and weary, we trundled off to find our rooms once more and sleep wasn’t far away.
Where did it all go right?