Competition Time
Having no prior knowledge of this town in Brittany, most of us had no idea what to expect. Mike has played here many times however and mentioned the great cafes and bars in the centre of town many of which he has frequented in the past. In the 5th century, Bretons occupied the Western peninsula of Brittany. Bretons were as you’ll most likely guess, from Great Britain and spoke an insular Celtic language known as British and before it was called Brittany, around the 6th century, this area was known as ‘Little Britain’. This Celtic link with its fundamental musical association, is part of the reason Mike has visited so often with folk outfits. There have been links with Ireland, Wales, Cornwall and parts of North-Western Galicia in Spain ever since the Roman occupation of Britain from AD 43 through to their departure in AD 430. Maybe it was this which prompted Bretons to migrate Westwards. It’s fascinating today that this musical link between Great Britain, Ireland, France and Spain is so strong, something I learned a whole lot more about when producing the Vicente Amigo album last year. Incidentally, each region of Celtic music has its own bagpipes. Mike uses the Uilleann pipes whilst here in Brittany, the type they use are called ‘chevrette’ which means little goat. It’s not difficult to hear why this name was adopted.
OK. Time for a competition.
Jim, John and I went for a wander around the lovely center of Rennes and we came across a small record shop (which also sold clothes) and in the window was this display of vinyl albums. Can you name all SIX? Artist and Album title. Winner will receive program signed by the whole band.
COMPETITION NOW CLOSED. It was obviously far too easy. There were lots of correct answers. Our brief time spent in Rennes was lovely, it’s clearly a lovely place, sort of like a mini Paris with lots of cafes and bars with folks sipping wine and beers in the afternoon sun. It was humid too and the sight of all those beers in frosted glasses was taunting. Still, I know all too well that a drink before a show is a mistake. There are no passengers in this band! 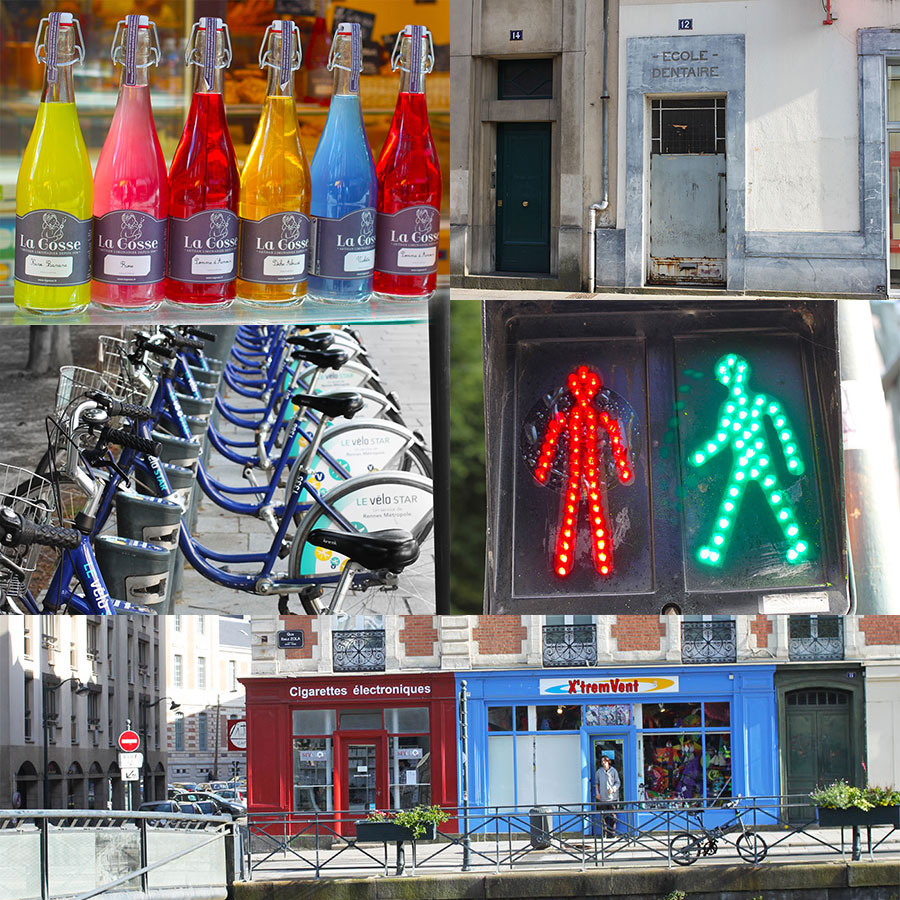 Jim and John decided to have some work done on their shoes although I’m not sure it was such a good idea. Tonight’s show was a standing arena and by the time Ruth went on stage, the place was completely rammed. It seemed like there wasn’t room for one more person on the floor. I’m not sure how many it was, maybe 5,000 but it was certainly sold out. What is unusual with standing audiences is the level of respect shown to the artists. This wasn’t the case in days gone by and standing audiences were known to be quite rowdy. I’m not sure what has changed but I know it’s for the better. Maybe we’re just all a little older…and wiser. Maybe ultimately we’ll all wise up to the fact that filming the gig on your smart phone, IS NOT SMART!
By the time we went on, the crowd were so up for it. We launched into our set and once again were joined by the amazing Ruth Moody for a couple of tunes. Once again, whilst I have the stand, if you haven’t got hold of her album. What are you waiting for? This girl is the absolute business. She’s such a great singer, songwriter and a delight to be around. We’ll sure miss her when she leaves at the end of the week.
After show, it was the familiar routine, run back to the aircraft where Liz was ready with food and drinks. Richard had been recently gifted a magnum of Duvel Belgian beer so we delighted in that for the short trip back to the madhouse that is Paris. By 1:30am we were back in our rooms contemplating another long, whirlwind day.
What a tour.